Post the partying that was Beni, we were compelled to go in search for a) the best paella in the Spanish east coast and b) for some quiet chilled out beaching!

First point of call was Peniscola! Despite the obvious immature reaction from my behalf, it was a surprisingly nice town, but just not what we were in search of. Small? I think not, quiet?…hmmm we both agreed, it was a quick bite and vamos!

It was getting late so, via the help of a tourism desk in Peniscola, we ventured towards Alcossebre…

It wasnt quite the atmosphere we were after, but it was getting late and quite hot, so we checked into the only available hotel. [Alcossebre Hotel]

By absolute chance, we happened to get a cracking deal for the master suite… unnecessary, however as sleeping choices were getting limited as the warm Spanish set, we checked in, showered, and pretty much had the best sleep ever!.

There is something indescribable about your first hot shower with unrecycled water, not amongst 10+ semi naked folks around and a line behind you…This shower had 4 jets…I used all of them simultaneously as I washed off the sand, the dirt, and the sounds & smells of Benicassim…

I know what your thinking… what did we eat that night? Please don’t ask… It was late, and all we could find was this beach cafe type thing, which is quite common in Spain. [Basically some weird ‘Russian salad’ and some tapas, but it wasn’t the best] The view was beautiful, we ate ____ as we saw the evening sun paint the sky red.

The first night, all I could think about eating was Paella!…

So here we started our ‘search for the best Paella’.

FRESH seafood Paella for you with a bottle of semi-sweet dessert wine to follow. Again over looking the pink sky, warm sea air tickling our skin. 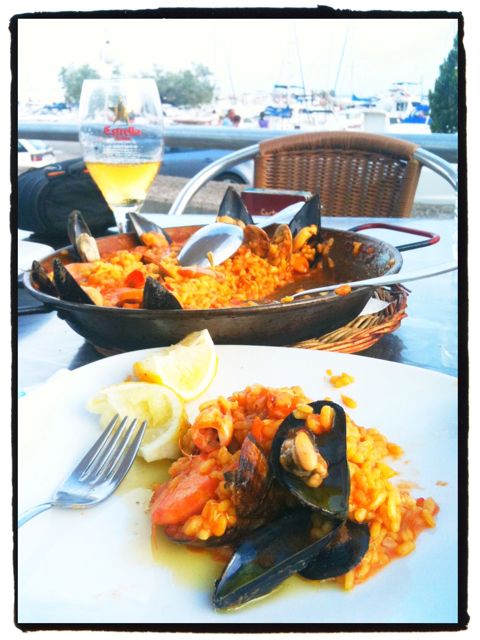 The flavours were just amazing!. Rich in seafood, texture, colour and ofcourse flavour.

I did miss the slight crunch of the ‘burnt’ bottom layer of a perfect paella, but it was still amazing and there were definitely no complaints from us. [Even though they decided to play top 100 songs from the 80s and 90s, good bottle of wine drowned that lovely sound :)]

It had been another perfect day with glorious relaxing weather, we spent hours sitting and soaking in the sun, exploring and watching the long day go by. It was time for dinner and boy was I exited!.

Honestly, the simplest things wow me! [as AM says :)], but its true, its always the simplest elements in life that make you go ‘ahhhh’. 🙂

I WAS actually on my way to say ‘i’ll have the Paella please’, when Paul suggested I flirt with something different… the truffle ravioli with truffle sauce? hellooo! done deal!.

I just need a moment here to compose…

This meal, was seriously, THE MOST YUMMIEST RAVIOLI I have ever TASTED! ever!!!!

I think Paul actually died a little death with every stolen mouthful, and secretly, although his squid-ink spaghetti was delicious, I think he wished HE had ordered the truffle-gasmic culinary delight.!!!! so good!!!!

A lot of the time pictures just dont do it justice. Although its just a mess of creams with speckles of black…it was truly a magical dish… and would be more than happy to try that again!! 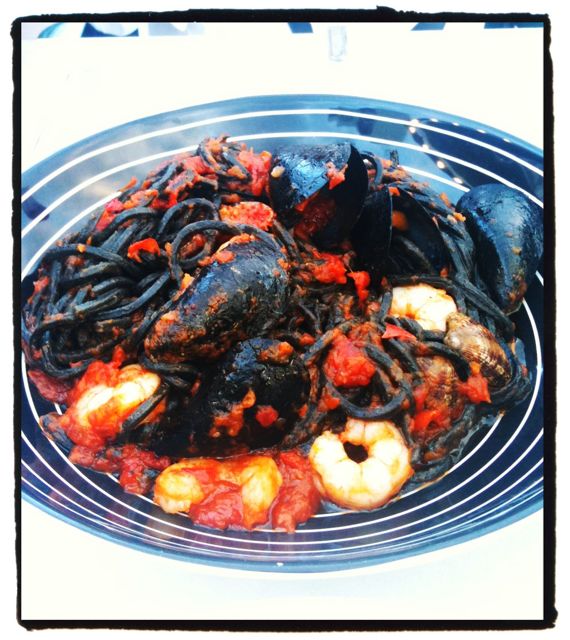 Although this was an entry about dinner, I guess if its the first real meal of the day, and it ‘broke my fast’….whos to say really 🙂

it was delish, and satisfying and relaxing, what more can you ask for.